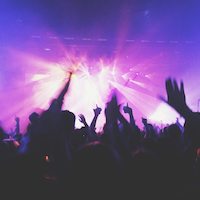 MADISON, WIS. - The inaugural Between The Waves Madison Music Festival & Conference is proud to partner with the Majestic Theatre to present this free, all-ages show that will feature some of the best talent that the Madison hip-hop community has to offer. Featured acts include the Dogs of War, Rob Dz, RIP, Chris LaBella, Keon Andre and Charles Grant.

"This is some of the top talent in Madison," says festival organizer Luke Jorgensen. "This will be a night that hip-hop fans will proudly remember for a long time."

The Between The Waves Music Festival & Conference is showcasing multiple genres of music over the 4- day conference and 2-day festival. The hip-hop showcase will be at the Majestic Theatre on King Street on June 17 at 7 PM. Including five additional stages at The Brink Lounge, High Noon Saloon and an outdoor stage, a total of 45 bands will perform.

"We are thrilled with the lineup in our first year," states BTW Madison Founder Roy Elkins. "Local music fans will see some of the best talent that our great city has to offer."

Dogs of War
Dogs of War is a groundbreaking band that is a transcendence of rock and hip-hop. The five-piece collective is a true hybrid that takes pride in utilizing the talent and diversity of their band. Dogs of War consists of two award-winning emcees, Tefman and Samhain Bane, from the veteran hip-hop group The L.O.S.T S.O.U.L.S and is backed by three incredibly skilled musicians: Anthony Salas (guitar/lead vocalist), Dustin Harmon (bass/sound engineer) and David Payne (drums).
dogsofwarmusic.bandcamp.com
facebook.com/dogsofwarmusic
twitter.com/dogsofwarmusic

Rob Dz
Rob Dz is a prolific artist and activist residing in Madison. Dz has rocked with Nas, Common, Eminem, Talib Kweli, Blackalicious, Black Eyed Peas, Murs, Wale, Rhymefest, Zion I, Atmosphere, Immortal Technique, Naughty by Nature, Bone Thugs And Harmony, N.O.R.E., Afroman and others. As a member of The Chicago Yestet, the band has been reviewed in Downbeat Magazine as well as being featured performers at The Chicago Jazz Festival. He has appeared on ESPN's Midnight Madness Special at George Mason University as well being selected as a national semi-finalist on MTV's Ultimate Hip-Hop Talent Search. He has been named Spoken Word/Poet of the Year by Madison Magazine as well as Best of Hip-Hop by Isthmus Magazine. As winner of Best Hip-Hop Artist, People's Choice Award and Best Hip- Hop Song and Album by the Madison Area Music Awards, Dz is a leader in the soulful Midwest hip-hop movement. With a goal of touching listeners without sacrificing integrity, Rob Dz is putting the soul back into soul music, and that itself, is quite an experience.
imrobdz.com
facebook.com/robdz twitter.com/iamrobdz

RIP
In 2000, Illinois-born recording artist and producer RIP created his independent record label, RIP Records, while still in high school. Rip started DJ'ing at an early age, and his love for music soon turned into a passion for producing and recording. He also had a savvy knowledge for the direction of the music industry and was awarded a platinum plaque in 2003 from Atlantic Records and the Recording Industry Association of America, for his online promotional and marketing skills for one of their artists. After a full decade of releasing compilations, duo albums and mixtapes on his own label, and performing at shows across the Midwest, Rip relocated from the Chicagoland area to Madison, Wisconsin, and finally released his debut solo album "Fashionably Late" in June 2010. The album carried the lead radio single "Watchin Me" which garnered some radio airplay nationwide. Pete Jones, of All Access Media Group – an industry radio trade site – said, "This is a catchy record. It sounds like Top-40 radio." It was featured on the site as "Hot New Music" in both the Top-40 and Rhythmic platforms. Dubbed "driven, ambitious, hardworking, grassroots and savvy" by hometown radio program director, Erik Bradley, at WBBM-FM Chicago, RIP has graced stages all across the region – most notably at his hometown radio station's B96 Summerbash in Chicago, at the Taste of Madison, at Dane County Fair and at the World Famous Brat Fest in Madison.
rip-records.com
facebook.com/ripmusic twitter.com/whoisrip

Chris LaBella
Emerging from Madison's vibrant music scene, Chris LaBella has been tearing up stages across the Midwest and receiving national airplay along the way. Armed with his trusty guitar, LaBella's mix of hip- hop and rock is a refreshing change of pace. Quiet and unassuming, Chris has made a habit of impressing the audience when he steps on stage. Driving rhythms and funky bass lines get the crowd nodding their heads while his smooth flow and honest lyrics resonate with their souls. The roaring guitar solos are just icing on the cake.
chrislabellamusic.com
facebook.com/chrislabella608 twitter.com/chrislabella608

Keon Andre
Hailing from Hammond, Indiana, Keon Andre was introduced to hip-hop as a way to escape the pitfalls of street life. As a child of the struggle, Keon took his hustle to a legal level by forming Major Moves Entertainment, where he matured his sense of business and his sense of being a man. Showing strong ambition and long-lasting determination, Keon doesn't follow the trend, he sets the standard. Influenced by a melting pot of artists and producers – specifically, 2pac, Nas, Kanye West and Andre 3000 of the group Outkast – Keon Andre unleashed his presence to the hip-hop community with his debut album "Dark Past, Bright Future" showcasing his riveting verbal imagery and impressive chorus lines that motivate the crowd to new levels of enthusiasm. He has a passion for music like no other and is a force to be reckoned with in the competitive industry of hip-hop. From his struggle as a child to his ambition as a man, Keon will always deliver a show-stopping performance.
keonandre.com
facebook.com/KeonAndre

Charles Grant
Charles Grant is a 25-year-old emcee from Westfield, Wisconsin, who released his first project this year on March 22. In his short 1-year career, he has opened for such acts as Yelawolf, Cage, Aesop Rock, Prof, Atmosphere, Caskey, Toki Wright and several others. He had the opportunity to travel the country and perform in 16+ cities with New York natives BBAS members Koncept and J57 on "The Future Prospects Tour".
soundcloud.com/charlesgrant608
facebook.com/charlesgrant608

The festival portion promises an exciting multi-night, multi-stage musical extravaganza, showcasing various genres with featured performers and opportunities for conference attendees to get in on the act. Between The Waves Madison Music Festival & Conference is the new destination for musical instruction, collaboration, networking and entertainment. Conference and festival tickets are available for purchase now at www.btwmadison.com