BETWEEN THE WAVES FEATURED IN WISCONSIN STATE JOURNAL 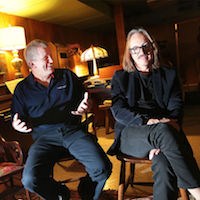 MADISON, WIS. - Want to have a big career in music — in Madison? Roy Elkins has some ideas for you.

Elkins — the founder of Madison-based Broadjam, one of the premier Internet-based music companies in the world — is behind "Between the Waves—Madison Music Festival and Conference" happening Thursday through next Sunday near Downtown. Backed by the City of Madison, the conference is designed for people who want to make music their life's work.

Between the Waves is geared toward performers, songwriters, producers, engineers, entrepreneurs and anyone else interested in the business, Elkins said. The goal: To help Madison's wealth of musical talent stay here, by giving creatives the tools they need to make a good living.

"I think (Between the Waves) is going to be very empowering. I think that's one of the things Roy tried to do when he set this up," said Butch Vig, who formerly ran Smart Studios in Madison and is a member of the famed band Garbage, which got its start here. "The festival is designed to be extremely educational."

For a $69 conference fee (Madison high school and college students are free), "Between the Waves" participants can hear talks such as "Yes, Your Band is a Business" (by Frank Productions CFO and business manager Marla Frank), "A Job We Don't Hate: Making Music, Making A Living" (by artist and producer DJ Pain 1), "Top 12 Recording Tips" (by independent producer/engineer Fett) or "How to Make an Extra $100K a Year" (by author/speaker Martin Atkins).

Madison-based jazz legend Ben Sidran also will talk on how he built a long career in the music business as a "do-it-yourself guy."

"Being removed from Los Angeles or New York or Nashville, the hubs of the music industry or television and film, I think there's a stigma that you really can't make it in the Midwest," said Vig, who will speak at the conference via Skype while on tour with Garbage.

"I did — I ran a studio here for 30 years, and I'm from Viroqua, Wisconsin," he said. "I think to be involved in an educational conference like this empowers young artists and musicians so they can do it themselves. They can learn the ins and outs of publishing, how to do it the right way. How to get a manager, how to book a tour, how to incorporate your band legally so you can be safeguarded."

Participants can find and follow their own track through the conference, Elkins said.

"If you're a songwriter, you can just focus on songwriting. If you're a producer, there's technology classes every hour on the hour for two days," he said.

"So no matter what aspect of the music industry you're in, you can come to the conference and get educated by some of the best of the business."

Forty-five polished local bands also will perform Friday evening and through most of Saturday as part of a Between the Waves showcase. The public can attend a number of events, including the weekend shows plus admission to hear top guest speakers Friday and Sunday for a $35 ticket price.

Elkins made the conscious decision to feature only Madison-area bands in the Between the Waves shows this year. They'll fill stages at the Brink Lounge, Brink Nightclub, Majestic Theatre and High Noon Saloon. The 2017 Madison Area Music Awards will follow the close of the conference Sunday night.

"I think, long-term, we hope to have our own pin in the map. When national companies start thinking about where they're going to market their products, when national acts may want to play here, or even up-and-coming acts, I think long-term, we would like to be a destination," Elkins said.

"Ultimately, though, the purpose of this is to promote the Madison music scene. I think we're so overlooked because of where we are. We have so much local talent, in every genre. We have a university, a very creative town — so I think we have a real opportunity to turn this into something."

Elkins has been working on the Between the Waves concept for about five years, he said. When he took his idea to the city, "I was absolutely impressed how supportive the mayor and the alders were. They really want to create this 'creative economy' in Madison," he said.

The city provided $25,000 in seed money for the event, said Madison arts administrator Karin Wolf. Looking for fun? Get recommendations sent to your inbox

"I've been in the music industry all of my life, in the technology side of the business. I came out here in '97 to work for Sonic Foundry and fell in love with Madison," said Elkins, who started his "DIY" (do it yourself) company Broadjam in 1999.

"We have 180,000 musicians from 190 countries on our site. They upload their songs, post their music. And I've been thinking of some kind of gathering (for musicians) for all those years. That was the impetus for it: Just wanting to do something for the local music scene."

The music industry has changed drastically over the past 20 years, mostly because of technology, Vig said.

"A kid can make a song on their laptop on Sunday night, and post it at midnight and a million people can hear it in 24 hours. That did not happen 20 or 30 years ago. So it has in some ways taken the power away from the big distribution networks and put it in the hands of the artist. That's one of the things we're trying to talk about at the conference. How do you market yourself on the Internet?"

The conference also will stress the huge market available in TV and film, Vig said.

"There's so much content now, not just regular TV channels but like on HBO, Showtime, NetFlix, FX and Bravo — everyone has original programming, and they all want music," he said. "There are so many opportunities for bands to get their music out there."

Well over half the 300 spots for Between the Waves were sold by late May; registration is still open at btwmadison.com. Participants can also purchase admission at the door at the conference venue, Gordon Dining and Event Center at 770 W. Dayton St. near the Kohl Center.

"I hope it's very inspirational to all the attendees. That you can be just the average guy, and make it in the music business," said Elkins, who hopes the conference will become an annual event.

"I hope people walk out of this feeling like 'I can make my living making music. I don't have to become a huge rock star. There are ways to do this.' "