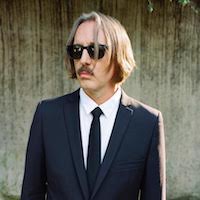 MADISON, WIS. - Butch Vig lives in Los Angeles, but it's not home. That would be Madison.

"I know every street and bar and pub and restaurant," said the celebrated music producer and drummer, reclining on a computer chair in the new Coney Island Studios on Atwood Avenue. "Before I started Smart Studios, I drove Union Cab — so I really do know every street in Madison."

Vig cut his teeth as a musician in Madison in the 1990s before emerging as a major player in the national industry, working on records like Nirvana's "Nevermind" at the now-defunct Smart Studios and drumming in bands like Garbage.

It's because of that "coming of age" he experienced in Madison that Vig was speaking to press at Coney Island on Wednesday afternoon. He was promoting a new venture that aspires to shine a national spotlight on Madison's music scene: Between the Waves, a conference and festival slated to take place across the city June 15-18.

"Madison is never going to be New York City or Austin, or Los Angeles or Nashville," said Vig. "But I think it is a vibrant city, and I think that we can put our name a little bit more on the map."

Between the Waves aspires to be a resource for independent music makers in the Midwest, with a goal of "teaching musicians how to make a living within 100 miles of their home." The conference component, to primarily be held in the University of Wisconsin-Madison's Gordon Commons, will be packed with seminars on topics ranging from social media strategy to composition techniques. It currently boasts a roster with speakers and educators like Vig, the rocker Kip Winger, jazz pianist Ben Sidran, and president of Warner Bros.' music operations Paul Broucek.

The seminars complement a festival component of Between the Waves, open to both the public and conference registrants, featuring dozens of Madison artists playing showcases at the High Noon Saloon, the Majestic Theatre, and the Brink Lounge.

Roy Elkins, CEO of the music media company Broadjam and the founder of Between the Waves, said that Madison has a "phenomenal pool of talent" that he hopes the event will bring attention to. He also stressed that putting Madison on the map would take years to accomplish.

This year's inaugural event is very much a trial balloon. Based on current registration numbers, Elkins expects a few hundred attendees.

"I think a couple of sessions will knock the roof off the place. A couple won't. A couple of the bands will blow the doors off, and a couple won't," he said, adding: "I hope for this festival, we learn what our mistakes were."

Vig won't be on hand for the conference itself — he'll be on tour at the time. However, he plans to Skype into the festival to do a Q&A with festival attendees "on production and music in general." Vig said that when he's done similar seminars in the past, he often fields questions on the artistry of production, along with how to get a job in the industry.

"A lot of times people talk tech-y nerd stuff — production ideas, or choices in terms of how you record something or mic it," he said. "I can go super nerd. Sometimes, I like doing that."

Vig said regardless of the topic, he's happy to open himself up as a resource for aspiring musicians. Even in the age of the internet, he thinks it's important independent creators have access to learning opportunities like the kind Between the Waves promises to provide.

"When I started out, I didn't know anything about recording," he said. "I just kind of had to make it up, ask people, take books out of the library."

As for the effort to "put the frozen tundra on the map," Vig said that Madison is already a fertile community with a reputation among bands as a great tour stop. The local music scene is robust, he observed, in large part thanks to the University of Wisconsin-Madison funneling young artists into town.

Plus, it's just nicer here.

"A lot of cities I've been in can be sort of standoffish, and competitive," he said. "I never saw that here."

The X factor, he said will be if more local bands take off in the same way acts like the pop artist Zola Jesus and indie folk band Phox did. The festival could help with that in time — meanwhile, Vig said, this year is just "baby steps."