BETWEEN THE WAVES FEATURED IN THE ISTHMUS 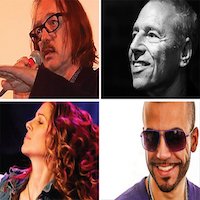 MADISON, WIS. - When somebody brings together such diverse musicians and producers as Butch Vig, Ben Sidran, Beth Kille, DJ Pain 1 and Kip Winger, he better know what he’s doing.

Roy Elkins knows what he’s doing. The Madison-based founder of Broadjam Inc., which helps musicians and bands promote their music online, has been in the music business for decades, and he invited some of his friends to Madison for the inaugural Between the Waves Music Festival & Conference at the University of Wisconsin’s Gordon Dining and Event Center from June 15-18.

More than 20 speakers will share strategies for how independent artists can make a living with their music. BTW, which Elkins conceived of four years ago, received about $30,000 in city and county grants and is the first event of its kind in the Midwest. In addition to live performances, it will also offer networking and educational opportunities for songwriters, composers, publishers and producers.

“Just about every musician I know would rather sit in a studio and write music. But the hard work begins after the music is done,” Elkins says, pointing out a major mistake many musicians make. “Do you know how many CD release parties I’ve been to where the CDs aren’t there? You do not schedule a CD release party until you have CDs in hand.”

The conference offers Q&A sessions along with master classes, songwriting and composing workshops, business panels and DIY career-building workshops.The sessions have titles like “Yes, Your Band Is a Business” and “Composing Original Music for Ads.” Others focus on diversifying merch offerings, increasing publishing opportunities and booking better gigs.

“The music industry today is DIY,” says Luke Jorgensen, producer of BTW’s festival component and frontman for The Lower 5th, a folk, rock and soul band from Madison. “A lot of people come into the industry not knowing how to do it themselves, but it’s less complex than they think.”

It’s not easy, though, as Amber Swenor can attest. “I anticipate this conference will help us think more strategically about what we want to do with our music,” the vocalist for the Madison-based symphonic metal band Morningstar says. She will be among the conference’s expected 200 or so attendees — many of them from the Madison area. There is a fee for attending the conference, but high school and college students with “.edu” email addresses receive free admission.

Producers and artists can license their work for original new programming via platforms like Amazon, Netflix and Hulu, according to BTW presenter and famed Madison artist/producer Butch Vig. “All those shows need music, and there’s a ton of opportunities for people to license their music to television and films,” says Vig, who produced the likes of Nirvana and Smashing Pumpkins at Smart Studios and is working on a film soundtrack while also preparing for a Garbage summer tour with Blondie.

“It would be great if this becomes a regional conference and festival, but that will take some time,” Vig says. “The only way people notice a scene in a city is if there are successful artists from there. Madison is never going to compete with Los Angeles or New York, but one of the reasons I stayed at Smart Studios is because bands I produced loved coming here. They were happy to not go to those bigger cities. It would be cool for Madison to become better known for the artists who live and make music here, too, and that will happen if they start to make a name for themselves.”